In early 1927, Raquette Lake residents who were members of the Proestant Faith held services on Tuesday evenings in either the waiting room of the railroad station or in a railroad coach on the siding.  Rev. Herbert Baird, then minister for the Church of the Lakes in Inlet, was their minister. Music was supplied by a portable pump organ which was easily moved into the coach. Not long after this the congregation was organized as the Chapel of the Church of the Lakes. A similar chapel had just been established at Big Moose. The next step was to have their own church building. One possible site was the shed Collis P. Hungtington had built in 1900 to house his and other private railroad cars.  The shed had lapsed into disuse since Mr. Huntington’s death. Different people had tried unsuccessfully to interest the Huntington family into selling the siding and shed. But, when Mr. Andrew Nielson, a NY real estate broker and summer resident of Inlet, volunteered in 1927  to contact the family, he succeeded where others had failed. It didn’t hurt that he had previously sold a Huntington home and knew the Huntington attorneys. The property was sold to the Church of the Lakes by the Huntington heirs for $1. The deed gives the date of transaction as September 10, 1927 and is signed by Archer and Anna Hyatt Huntington. The deed restrictions preclude use of the property for anything but religious purposes, although the erection of a library  was an acceptable exception.

After the property was acquired, construction on the present Chapel building began. John Blanchard was the contractor. His grandson Jim and great granddaughters, Katie and Arielle , are sitting in the congregation tonight. Jim’s father, Paul Blanchard, designed the uniquely shaped windows. Other people involved in the construction include: 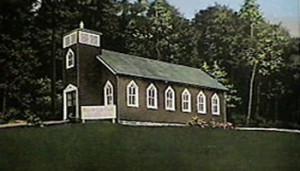 Being in a resort area, the church summer schedule varied from the winter one.  And because one minister, Rev. Baird, couldn’t offer Sunday worship in all the little churches, a summer assistant was secured. The first intern was Mr. Ganse Little, a student at Princeton Theological Seminary, who arrived May, 1927.  He resided at the Manse in Inlet with Rev. and Mrs. Baird. This practice of having a summer intern continued until 1970.

Rev Baird was called to a church in Whitesboro, NY in Oct, 1928. Church records are practically non-existant for the Chapel from 1928 until 1958 when the Chapel started keeping its own records.

With the depression tourism was greatly diminished and summer resort areas were hit hard. Churches in these vacation areas were severly affected by the loss of many summer residents and hotel guests. During the depression and for some time afterwards the Church of the Lakes in Inlet and the Raquette Lake Chapel could no longer afford to support a full time pastor. They were forced to rely on Sunday supply ministers.

The Chapel and the Church of the Lakes continued their partnership as Church and Chapel until 1970, at which time the Raquette Lake Chapel became an independent church.

Since its original construction, the Chapel has been remodeled once, in 1959, and enlarged once, in 1967. During the 1950’s the wooden folding chairs which the congregation originally sat on, were relegated to the choir and pews acquired from a church in Ithaca were installed. Fred Burke drove to Ithace to get them and Ami Martin fitted them to the Chapel floor and then stained them to match the existing wood work.  The steps leading up to the Chapel driveway from the lake were also built at this time. During the enlargement phase, new carpeting was laid by Art Jenkins and new pew cushions were added, as were three more pews. Dedication of the enlarged and renewed Sanctuary took place on June 18, 1967, in memory of Orrin Lanphear whose family had initated the improvements.

The wrought iron chandeliers were gifted to the Chapel in 1962 by Blanche and Lee Krinsky of Raquette Lake Girls Camp.  The chandeliers once hung in the large dining room of the Antlers Hotel. Carl Kammer, Jim’s father, installed the lights. The other chandelier was rescued by Bea Waldron on its way to the dump! As luck would have it, it was an identical matching fixture.  With a little ingenuity it was put in condition for hanging by Bea’s husband, Harry Waldron.

The side lights in the choir area , from an old home on Genesee St in Utica, were gifted to the Chapel by Mary Waldron Henry in memory of two school friends who lost their lives in a car accident.

The candelabras on the walls were purchased with money raised by the children attending the Friday release time classes.

Other gifts include 50 new hymnals given in memory of Sharon Beckingham, pulpit Bible given by Mr. And Mrs. Kenneth Wanamaker, the Church Steeple in memory of Carol Marian Jones an Echo Camp counselor, an organ given by Mrs. Frances Clough Havinga on the 20th Anniversary of Echo Camp, and new front doors purchased and installed in memory of Mother Bird.

Sunday School was taught from the beginning, sometimes in the waiting room of the RL RR station or on a rr car or in a private home. During the late 1940’s class was held in the lobby of the RL Hotel. Other long-standing traditions were the Sunday School annual picnic, first held at Dr. Evans’ camp on Tioga Point , then Buttermilk Falls and sometimes moved indoors to the Antlers Hotel when the black flies were just too thick!

The Annual Bazaar has been a fundraiser from the beginning.  The earliest fairs were held on the church grounds with games and contests for the children along with the usual sale of fancy items and homebaked goodies. Later bazaars were held in the RL Casino or the porch of the RR Station and finally, for the last several years, at the RL Firehall.

Easter Breakfast, put on by the men, was an annual fundraising event for several years.

Housekeeping and routine maintenance chores have been done on a voluntary basis from the beginning. Among the first caretakers were the young twin brothers Harry and Howard Waldron.  The boys cleaned the Chapel, brought in the wood and started the fire so the congregation could worship in comfort.